When my friend asked me if I fancied seeing Black Swan, I had visions of the following: a struggling ballerina (who maybe lives on the wrong side of town) has to nurture her inner talent in order to perform a final dance that raises lots of money to save the community centre, whilst romancing an easy-on-the-eye male lead and perhaps having some kind of make-over (like taking off her glasses or letting her hair down) in the process. It became apparent within about 20 seconds that this was no ‘Step Up 2: The Streets’. 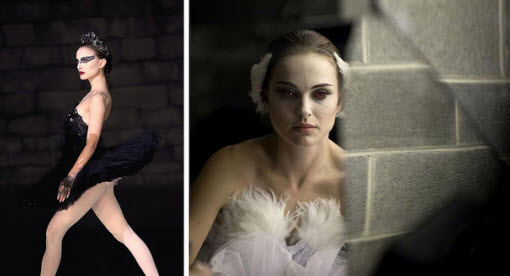 To summarise (without giving the game away), Natalie Portman plays Nina, a shakily timid yet gifted ballerina who wins the lead role in Swan Lake, in which she is required to play both the sweet, virginal White Swan and the evil, seductive Black Swan. The wonderfully French choreographer, Thomas Leroy (played by Vincent Cassel, who is one string of onions away from being Hercule Poirot), swaggers his way through the film, taking full advantage of the power he holds over the wannabe prima ballerinas… even creepily calling the out-of-favour Beth (played vividly by Winona Ryder – all that time off ‘shopping’ clearly did her acting prowess the world of good) his “little princess”. Which made you instantly want to take a shower to rid you of the sleaze. Anyway, his aim is to coax the concealed femme fatale out of Nina, so that she can shine as much in the Black Swan badass role as in the White.
After a couple of, shall we say, European suggestions, from the fey tyrant, Leroy (as in, ‘the King’… oohh, that’s what that’s about…), the breakthrough, or indeed breakdown, for Nina comes when she is befriended by the vivacious and free-spirited Lily (played by Mila Kunis), who fascinates the former with her lack of apparent inhibitions. Tattoos? Check. Recreational drugs? Check. Staying out past curfew to infuriate Nina’s already unstable mother? Check. Activities that will excite the male audience? Uncomfortable check. However, Nina soon fears that Lily is after her starring role, and so begins the rapid (compared to this film, Nemesis at Alton Towers is achingly slow) decline of her mental state. Which was never very solid in the first place.
I’ve never been one for horror/psychological thrillers, but this one’s a humdinger – director Aronofsky really pulled out all the stops with Black Swan. Even when there is some pretty ballet dancing on screen, you have a sense that any second something creepy and unexpected is going to happen. Remember that music in Jaws that gives you advanced warning that the scary bit is about to go down? Well, imagine that music playing for the entire film. Seriously, there’s no respite. Just as you think you can breathe again, Portman snarls, her eyes turn red and you’re back on the edge of your seat (I should have asked for half my money back, I never used the whole thing).
As for the cast, Portman is 100% deserving of the accolade that she is currently receiving. She certainly embraces every aspect of the role, from her shockingly fragile ballerina frame to the range of emotion that changes in her face every second. Her eyes in particular are mesmerising. This is no run-of-the-mill, two-dimensional Hollywood actress… she is astounding. The rest of the cast, too, compliment her performance, especially Kunis, who I’ve been fond of ever since Forgetting Sarah Marshall.
So, what have we got here? There are so many underlying themes it’s enough to give you whiplash – perfectionism, bulimia, body dysmorphic disorder, rebellion, competitiveness, coming of age, sexual predatory behaviour, hatred of your mother, mental illness… to name but a few. The film feels like it’s been shot with a hand-held camera, making the picture grainy, jerky and claustrophobic; with lots of behind-shoulder shots (I don’t know what the professionals call this… I call it ‘irritating’). There are hallucinations abound, intensified all the more by the score, which is like Tchaikovsky on acid. The music was so loud that I feared for my ear drums (if only it had the same affect on my eye-sight… that, I could have done without). Gore, too, is dished out by the bucket-load, with lots of bloody toes and crunching bones for your enjoyment (which I’m guessing is a metaphor for concealed pain behind the beauty. Oh, I totally get this whole symbolism malarkey).
In a nutshell, did I enjoy it? No… no, I can’t say that I did (enjoyment for me means playing with puppies or picnics at the beach, not hiding behind my hands in a seat that cost £14). Was it an astonishing piece of cinema that I’d watch again in the safety of my home? Abso-swanning-lutely.
Btw – if you have seen it, and you’ve been trying to return to your happy place ever since, please take a look at this. Carrey, also a genius: