Last night it was the turn of the Screen Actors Guild Awards (with the amount of botox present, oh the irony of it being called the SAG Awards…) to come to Hollywood. Leo won again. Idris Elba made the UK very proud. And Nicole Kidman showed that she shouldn’t have the final say in which dress to wear – eesh. So, who earned their style stripes on the red carpet? Let’s take a look at my winners… 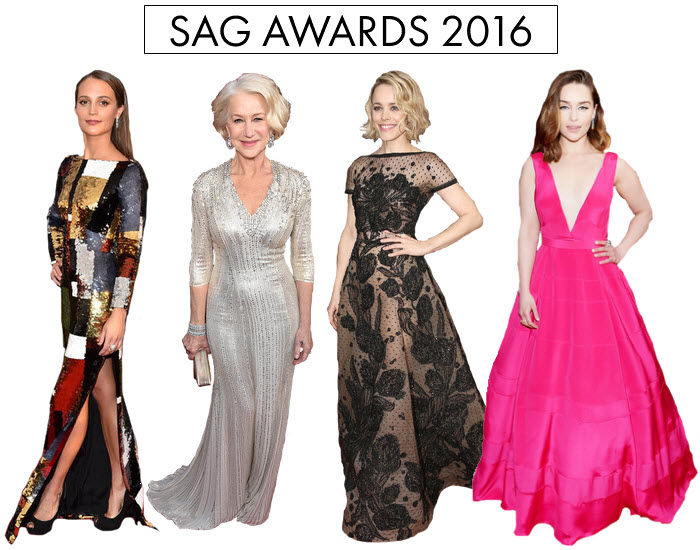 Alicia Vikander in Louis Vuitton
Can this girl do no wrong this awards season? Not only did she swipe the award for Best Supporting Actress, she looked incredible while doing it. Almost like a sparkly liquorice allsort, this look probably wouldn’t have worked on, well, most other people, but with the unfussy hair situation and that cool-but-not-arrogant way about her, she nailed it. Can’t wait to see her Oscars frock.

Helen Mirren in Jenny Packham
Another great British ambassador of the night. This is how you do it. Pure movie star.

Rachel McAdams in Elie Saab
Elie Saab is one of my very favourite designers, and this is a prime example of why. There’s a lot going on but it’s so very elegant… I especially love the top half and the little sleeves. I’m also a big fan of Rachel’s tousled hair and natural make-up.

Emilia Clarke in Dior
Fuchsia can often be way over the top and ‘Barbie goes to Prom’ (yes, Vergara, I’m talking to you), but in the right style of dress it can be killer. The hair, the jewellery, the deep V… Dragon Lady slayed it.

Did anyone stand out for you?