It’s award season! Life has meaning again! Through the apocalyptic-esque darkness of a Monday morning in early January came the Golden Globes red carpet run-downs. It really does make me so happy. Now, since I’m in an optimistic mood seemingly for the first time in 2016 (the sun came out today and everything) I’m only going to post my winning looks. Ladies, you’ve been spared the scathing remarks this time. Next time (Screen Actors Guild Awards, 30 Jan), you might not be so lucky… I’ll see what kind of mood I’m in.

Anywho, to the gowns! The list is short since Kate Hudson, Cate Blanchett, Jennifer Lawrence et al just didn’t bring their A-game for me. I feel like I’ve seen it all before (especially Kate Winslet who needs to spring for a new stylist sharp-ish). But it’s okay, they have time. So, here are the stars who sartorially did the business… 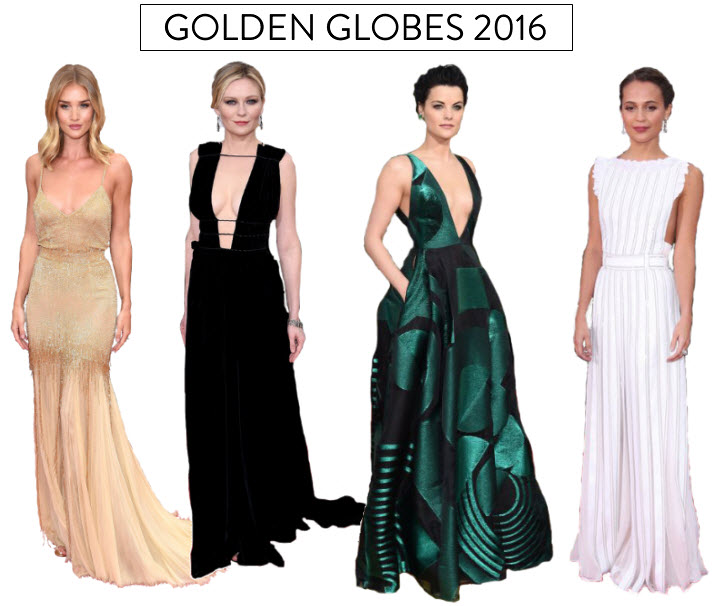 Rosie Huntington Whiteley in Atelier Versace
Newly-engaged RHW won the red carpet. No contest. She’s basically been dipped in gold, rolled in unicorn sparkles and paraded in front of the paps to make every woman on the planet feel like even on the most attractive day of their life, they’ll probably reach about 5% of this level of hotness.

Kirsten Dunst in Valentino
The artist formally known as Drunkst slayed it in this ensemble. There’s a lot ‘up front’, granted, but the flawless make-up and the rest of the gown kept it classy. Solid effort.

Jaimie Alexander in Genny
Even more beautiful on camera than in pics – and I’m talking about Jaimie and the frock. Adore the colour, love that it’s a bit different, and the Lorraine Schwartz emerald earrings were an inspired choice. Ladies of reality TV, this is how you flash the flesh.

Alicia Vikander in Louis Vuitton
A controversial choice, but huge props to Alicia for taking a chance, which 80% of the Globes line-up didn’t do. It feels quite ‘tennis chic’ to me, and it really pops against her tan and simple-but-chic hair. And give me a crisp pleat any day. 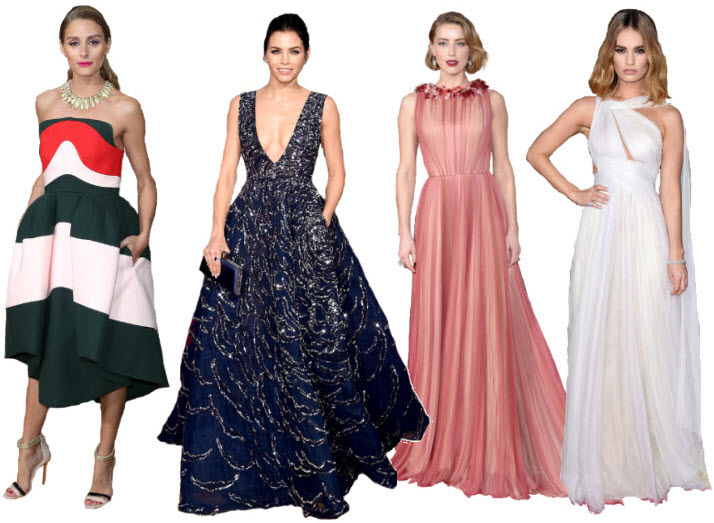 Olivia Palermo in Delpozo
It seems like the whole internet hates this look. Yet I loved it from the first time I saw it. I don’t know if it’s the preppy colour combo or the necklace or the way OP is just owning it, but it’s a winner for me. And the shoes. I’m dying over the shoes.

Jenna Dewan-Tatum in Zuhair Murad
After her turn on Lip Synch Battle with Channing, this broad can do no wrong. And she proved it once again in this exquisite dress. Midnight blue is always a favourite for me, but this was streets ahead of Winslet and Moore who went for the same hue.

Amber Heard in Gucci
Depp’s missus was born in the wrong era, she’s a 50s screen siren through and through. On anyone else, I’m not sure the foofy neckline and simples lines of this Gucci number would have worked. But I’m digging this look, a lot.

Lily James in Marchesa
She’s a funny one, Lily James. In photos she looks like a smouldering goddess, then in interviews she shows she’s just as much of a dork as the rest of us. This dress is beyond gorgeous. Yes, it’s a tad bridal, but it’s Marchesa, so it’s allowed to be.

Also, this happened. And the man-fancying population stood in unison and slow clapped those absurdly strong genes. 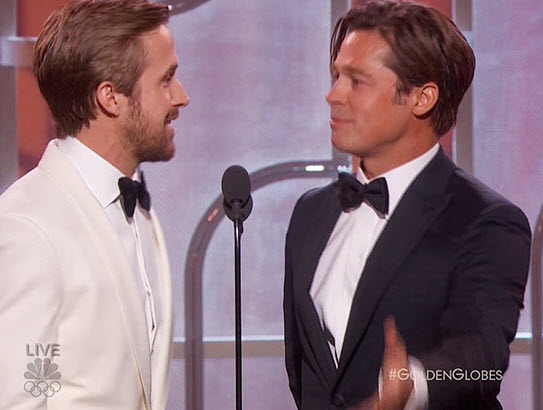 Tell me, what did you think of this year’s GG offerings?