I hope you all enjoyed the Queen’s Diamond Jubilee celebrations as much as I did. Since we’ve upped sticks and moved out of the Big City, we found ourselves glued to Sky News most of the weekend, in between unpacking boxes. There was a tiny part of me that wishes I could have been there amongst the vast crowds, experiencing the once-in-a-lifetime atmosphere… but then I remembered that I hate being pushed and shoved in confined spaces, queuing for public transport, and drizzle, so to be honest I didn’t regret my decision to stay put and raise a glass of bubbly to HRH from afar. If I know her as well as I think I do, I’m sure she would have understood. 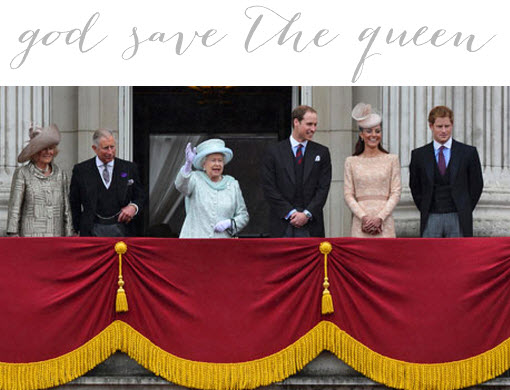 Now, I know the focus was quite rightly on the Queen (and didn’t she look utterly fabulous), but I felt that the media gave the Duchess of Cambridge some unwarranted flak. She was accused of trying to outshine the Queen in red Alexander McQueen, then of not taking enough fashion risks the following day in her tried-and-tested formula of lace and LK Bennett. Firstly, do these critics really think that our dear ruler would have let Kate step out in anything that wasn’t 100% approved? And secondly, the poor girl can’t win! Too racy in red, but too boring in beige. I am firmly on Team Kate, and through all the pressures that she’s under on a daily basis, I think she carries herself with incredible poise and grace. And looks flawless throughout. So in tribute to the Duchess (I don’t think the Queen would mind, she’s not one for the limelight anyway), here are my favourite Kate looks to date:

{images via}
Although one criticism I do kind of agree with… the LK Bennett nude pumps may need to be shelved for a while. Just sayin’.