The Help was the outright winner at last night’s Screen Actors Guild Awards, however the competition on the red carpet was a more closely contested affair. Following the Golden Globes, I have to say that once again I wasn’t blown away by the fashion choices. Yes, the ladies looked scrubbed up to perfection (and sitting here in a hoodie and trackies, who am I really to pass judgement), but no one stood out particularly. And annoying, no one got it spectacularly wrong. I suspect choices of gown were not left to a 2-year-old this time. Up there for my best dressed, at a push, was Michelle Williams, who fared far better in scarlet Valentino than she did at the Globes in the devore velvet Jason Wu disaster. I also thought that Dianna Agron looked stunning in Carolina Herrera and a Grecian up-do. There was a lot more colour on this red carpet, which made a nice change from the snoozeville nude army, but nothing came close to Kunis in McQueen last year (see here).

So, Brange Does Red Carpet, round two. Firstly, Brad in Balenciaga? Hot, hotty, hot. But dude, the hair’s gotta go. We’re veering perilously close to Nicky Clarke territory. As for Angie… hmm, I see this and I remember that I need to take the bins out. Ok, so she’d look good in a 99p refuse sack from the corner shop, but this is Jenny Packham for crying out loud. Packham does not a Duchess make. The Oscars are just around the corner, Ange… game face. 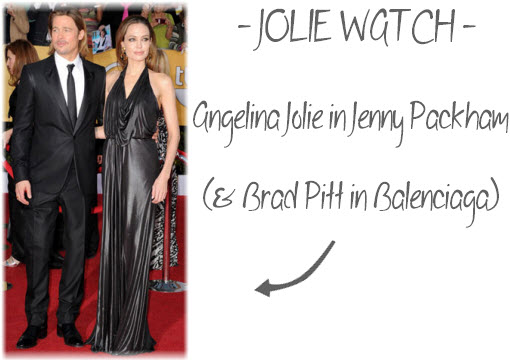