Awards season! Love it. Yes, the films are all well and good (I need to see The Artist and Warhorse at some point – although the latter would probably be better watched in my own home… sobs aren’t a good look in public), but it’s really the fashion choices I’m more interested in, if truth be told. The Golden Globes are usually seen as an opportunity to be a bit more daring in the sartorial stakes, however apart from a couple of clangers (e.g. Sarah Michelle Geller who apparently let her daughter choose her dress. Big mistake. You should never let a child choose anything until they’re old enough to realise that Crocs are ugly), everyone played it incredibly safe. Nude dresses were out in force (pretty if a little predictable), as were the black gowns and mermaids. Salma KILLED it in Gucci, Jenna Dewan has as good a taste in dress colours as she does in men, and Charlize was breath-taking. Here is my pick of the crop… but all-in-all ladies, you’re going to have to take it to the next level for the Oscars. Mila, I’m talking to you:

As for Angelina, it was a sorry state of affairs. Even though her look was largely praised by fashion critics, I’m gonna go out on a limb and say that she looked like she’d picked one of those hideous wedding dresses that incorporates a colour. And matching lips, collar and bag? Were Shiloh and Zahara sitting at home with Sarah Michelle Junior cackling mischieviously at what they’d made their mummies wear? 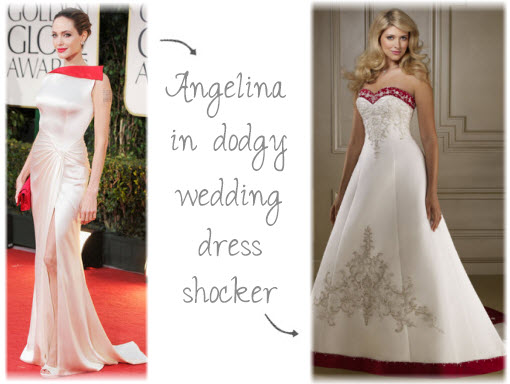 What a difference a year makes… (see here).